In the first article in this series, learn how to get started with Appium. We’ll dig into what Appium is, the essentials of the Appium architecture and how you can use Appium to solve your mobile test automation issues today. You can also skip ahead to read about how to set up your first Appium Android test and how to set up your first Appium iOS test.

I recently had the privilege to speak at Appium Conf 2021 on a topic quite near to my heart: Getting started with Appium.

Why? Isn’t this Quite Basic?

If you are an intermediate or advanced Appium user, then sure, 🤷🏼‍♂️ you may be familiar with this already.

However, I’m a fan of a concept called Shoshin (loosely translated as “Beginner’s mind”) and believe that relearning something opens up new ways of solidifying concepts and often enlightens you about the gaps in your knowledge.

When I started learning Appium back in 2018, I remember I had to struggle a lot to figure out where to start, what setups are needed to run my first test, or just even the underlying architecture.

This was a lot of initial friction and I remember thinking to myself:

It shouldn’t be this hard just to get started, eh?

Appium is a great automation tool and now having used it for a few years and having gone through the trenches I wanted to improve this experience for beginners. Hence the reason for my talk and this blog series. If you are curious about the Appium talk, the video is out on YouTube and slides over a static site.

In this 3 part series we’ll deep dive into:

Appium is an open source ecosystem of tools and libraries that help you drive your mobile apps (native, hybrid, and mobile web on platforms such as Android, iOS), desktop apps (Windows, Mac), and now even on platforms like Smart TV and much more 🚀.

Language agnostic: With Appium you can choose the language binding of your choice (Such as Java, Kotlin, Python, JavaScript, Ruby, C# … 🆓) and don’t have to be tied to the programming language of the platform vendors (Kotlin, Swift, etc.).

No requirement of SDK or recompilation of the app: Appium can drive the app from a grey box user perspective but does not need any app compilation step.

Cross-platform: Drives apps on different platforms and provided apps have the same business logic, could drive them with a single cross-platform test.

Before diving into practical setup and tests, it’s important to understand the Appium ecosystem in a birds-eye so that you can make sense of all the different components at play

The below high-level architecture diagram gives the perspective: 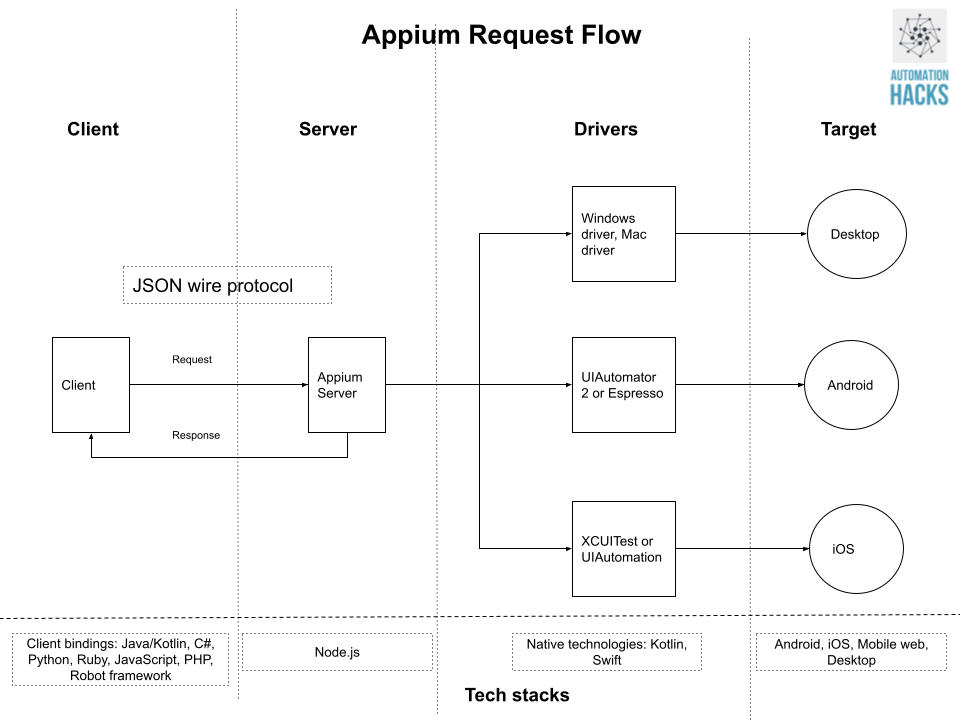 The core components are:

A typical request in Appium loosely looks like below:

Now that we understand the high-level components at play, let’s install some of these to set up our environment regardless of the platform that we choose to automate.

To set up the Appium server and other utilities, we’ll need to install npm, node. These could be easily installed with a tool like homebrew (mac), Linux brew (Linux), or chocolatey (windows)

We’ll assume using a Mac/Linux or WSL (Windows Subsystem for Linux) environment for this series but you’ll be able to find equivalent steps for the Windows platform by googling.

We’ll need it to install npm and node.

To install on macOS:

On Linux or WSL (Windows Subsystem for Linux), you may need to install Linux brew.

You can download and install node (10+) for your platform. Prefer choosing LTS (Long term support version) since that would be the stable version.

And verify that npm is installed as well:

Verify Appium server is installed by typing appium command in your terminal and see all server logs.

Appium 1.2x.x would be the last version supported by Appium devs and an EOL (End of Life) plan is already published on the Appium Github repo. Read it here. Since Appium 2.0 is the future of the project, let’s see how to install the new server and some key commands.

With Appium 2.0, drivers are decoupled and not bundled into the main server. This makes sense since if your app is only on Android, you wouldn’t need iOS, desktop, and TV drivers anyways right?

We’ll install Android and iOS drivers for this project using the below commands:

You can list all available drivers using the command:

After running the appium command, you’ll see an output like this and as you can see our installed drivers:

You can install Java from the Oracle site or the OpenJDK version:

On macOS: If you choose to install OpenJDK, then execute the below command:

Add JDK home path as JAVA_HOME variable. Since we would use the Java client binding for this series, this is a needed step.

Appium doctor is a CLI that provides insights on what dependencies are missing as well as how to install them. It even provides very helpful suggestions or notes on how exactly a dependency might be useful.

Make sure all required dependencies are installed: 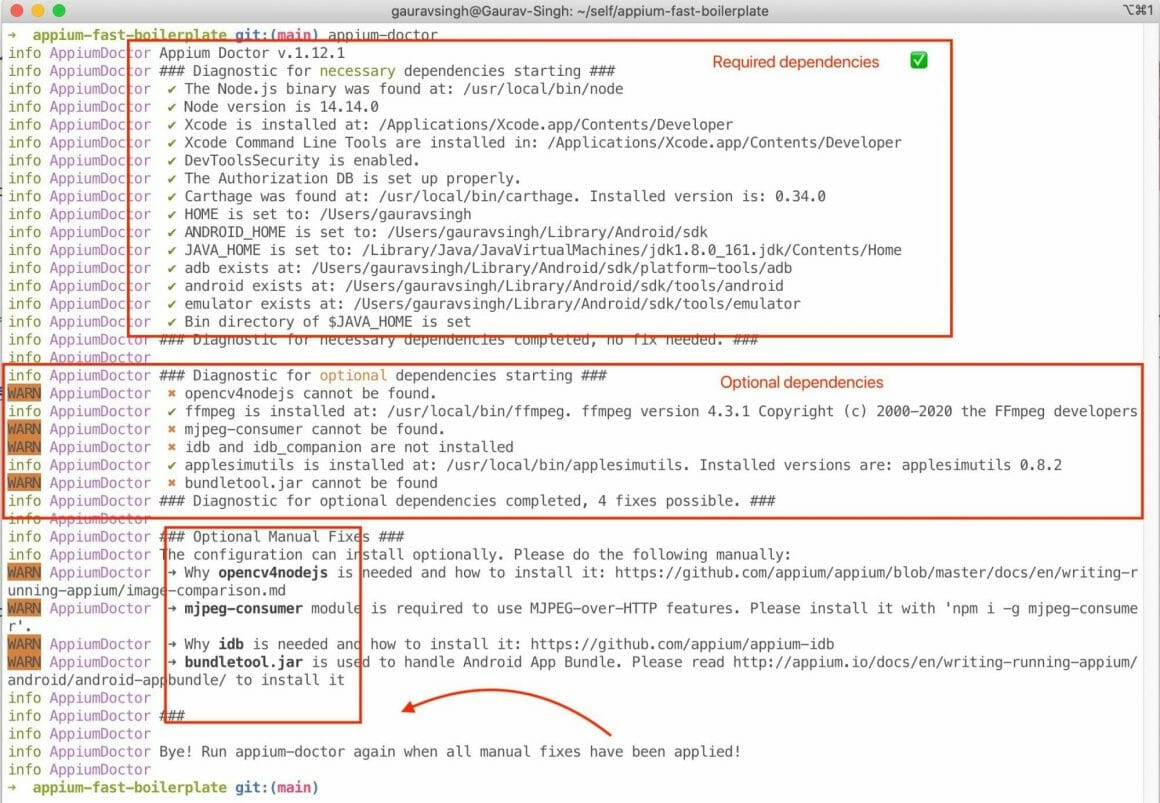 So hopefully you are set up with Appium, have a conceptual understanding of the different components, and are now ready to dive into writing our first tests for Android and iOS. Stay tuned for the next part. In the meantime, you can read the below docs to get further context.

Gaurav SinghGaurav Singh is an experienced Software engineer in Test who loves to code in Kotlin, Python, Java, and JavaScript and builds and scales Test automation frameworks and teams. He believes in understanding and testing at all the layers of the stack and has worked with Web, Mobile, and Backend systems throughout his career in different domains. He blogs at automationhacks.io and posts about his journey and adventures in Software Engineering and Testing. Gaurav is an International conference speaker and has spoken previously at conferences like Appium Conf, Selenium Conf, and Automation Guild and shares his knowledge and learns from others. He has also built a few open-source courses for Test Automation University.