This is the second post in our Hello World introduction series to Appium, and we’ll discuss how to create your first Appium test for Android. You can read the first post where we discussed what Appium is, including its core concepts and how to set up the Appium server. You can also read the next post on setting up your first Appium iOS test.

In this post, we’ll build on top of earlier basics and focus on the below areas:

We have lots to cover but don’t worry, by the end of this post, you will have run your first Appium-based Android test. Excited? ✊🏼 Let’s go.

To run Android tests, we need to set up an Android SDK, ADB (Android debug bridge), and some other utilities.

The easiest way to set these up is to go to the Android site and download Android Studio (An IDE to develop Android apps), which will install all the desired libraries and also give us everything we need to run our first Android test.

Once downloaded and installed, open Android Studio, click on Configure, and then SDK Manager. Using this you can download any android API version from SDK Platforms. 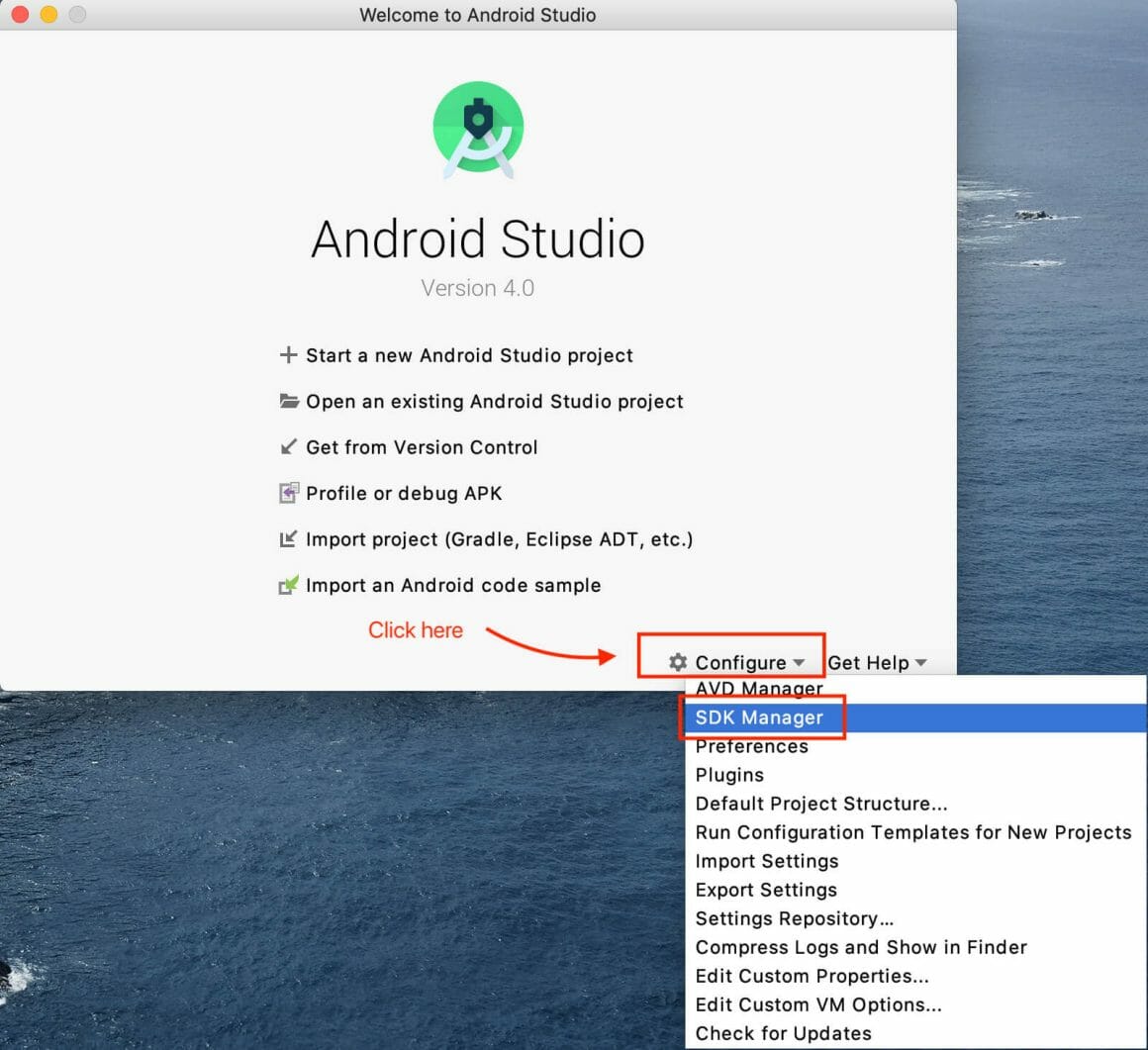 Also, You can install any desired SDK Tools from here.

We’ll go with the defaults for now. This tool can also install any required updates for these tools which is quite a convenient way of upgrading. 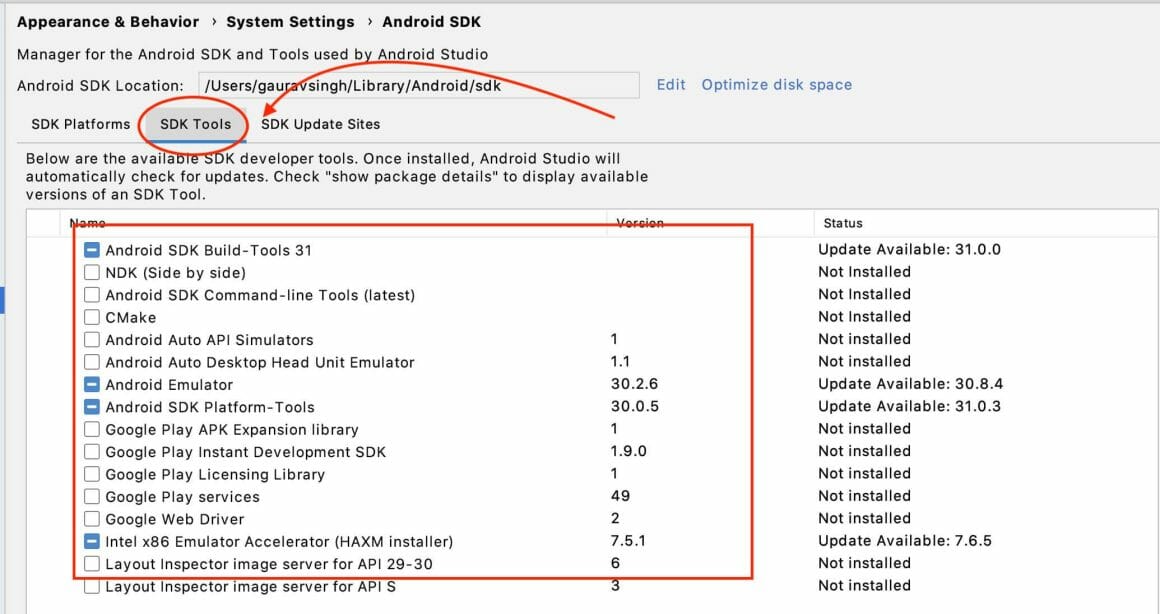 The Appium server needs to know where the Android SDK and other tools like Emulator, Platform Tools are present to help us run the tests.

We can do so by adding the below variables in the system environment.

If you are on Windows, you’ll need to add the path to Android SDK in the ANDROID_HOME variable under System environment variables.

Once done, run the adb command on the terminal to verify ADB is set up:

These are a lot of tedious steps and in case you want to set these up quickly, you can execute this excellent script written by Anand Bagmar.

Set up an Android Emulator or Real Device

Our Android tests will run either on an emulator or a real Android device plugged in. Let’s see how to create an Android emulator image. 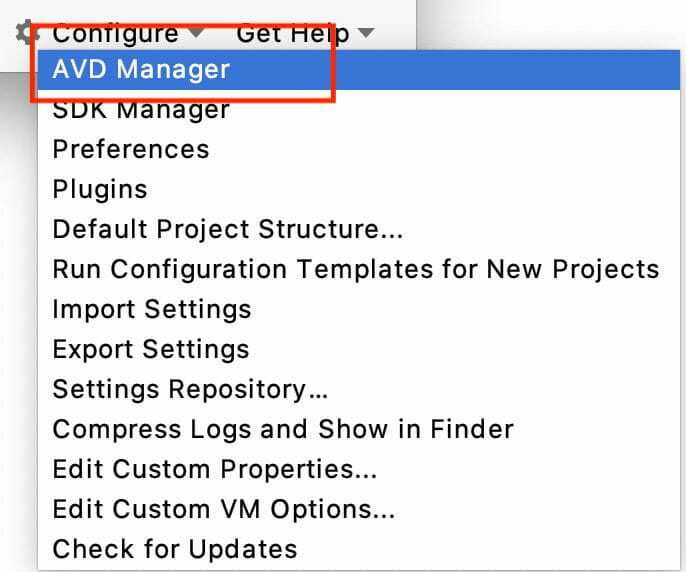 Next, select an Android device like TV, Phone, Tablet, etc., and the desired size and resolution combination.

It’s usually a good idea to set up an emulator with Play Store services available (see the Play Store icon under the column) as certain apps might need the latest play services to be installed.

We’ll go with Pixel 3a with Play Store available. 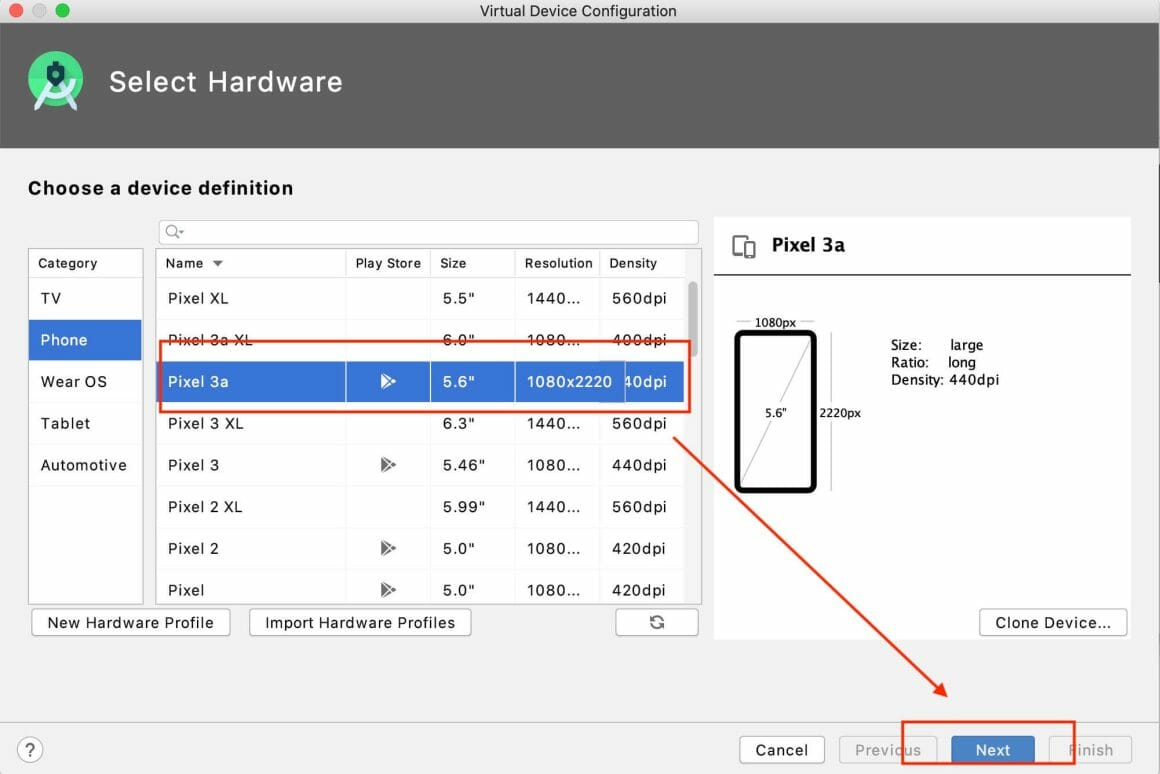 Next, we’ll need to select which Android version this emulator should have. You can choose any of the desired versions and download the image. We’ll choose Android Q (10.0 version). 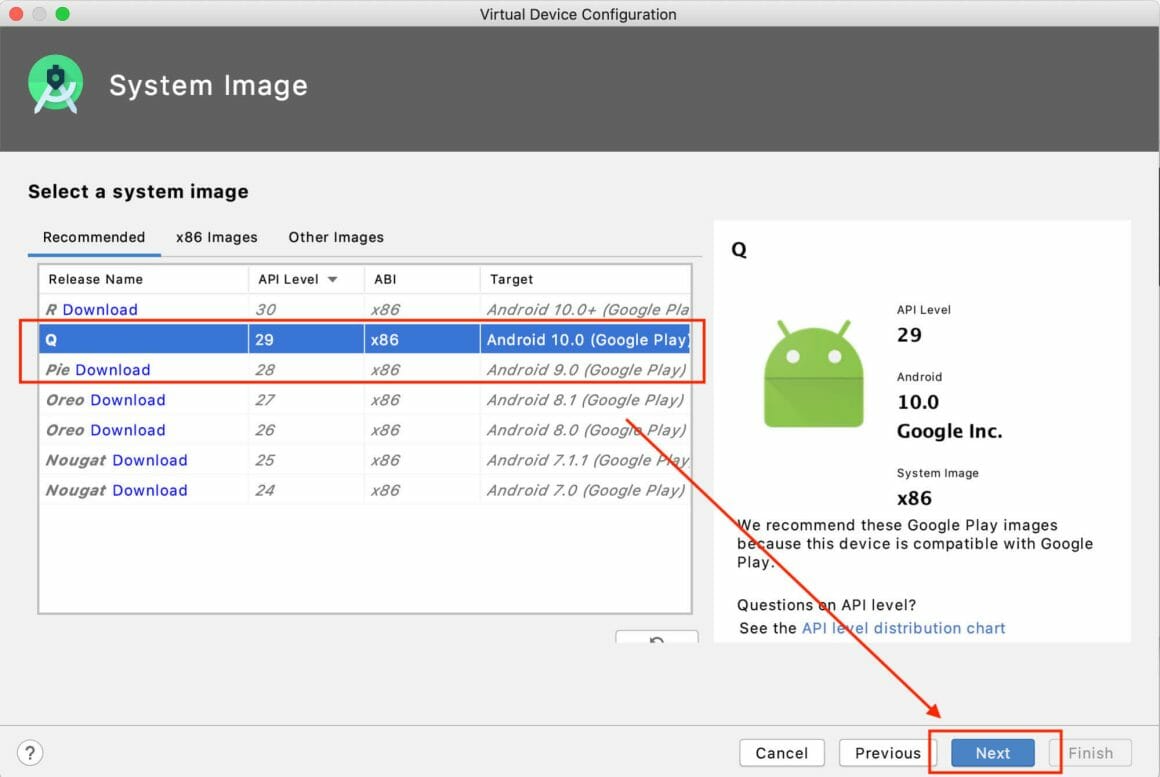 You need to give this image a name. We’ll need to use this later in Appium capabilities so you can give any meaningful name or go with the default. We’ll name it Automation. 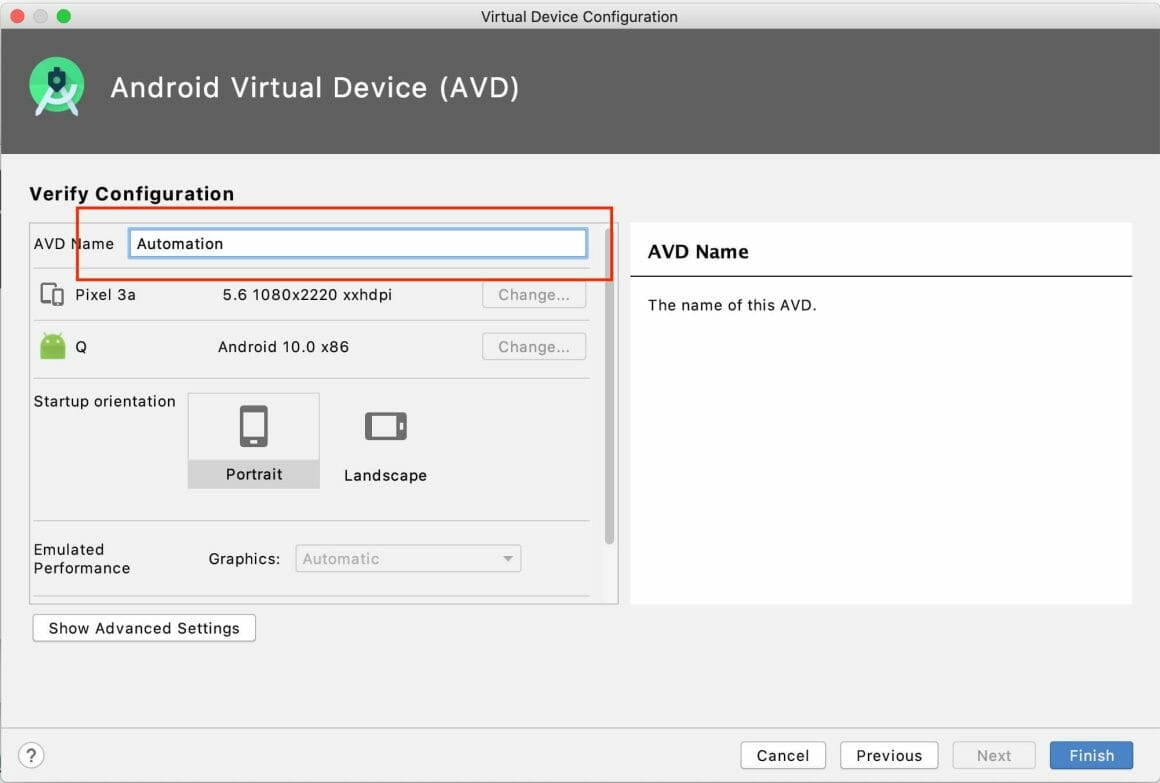 Nice, ✋🏼We have created our emulator. You can fire it up by tapping the Play icon under the Actions section.

You should see an emulator boot up on your device similar to a real phone.

Setting up a Real Device

While the emulator is an in-memory image of the Android OS that you can quickly spin up and destroy, it does take physical resources like Memory, RAM, and CPU. It’s always a good idea to verify your app on a real device.

We’ll see how to set up a real device so that we can run automation on it.

You need to connect your device to your machine via USB. Once done: And thats all you need to potentially run our automation on a connected real device.

Appium comes with a nifty inspector desktop app that can inspect your Application under test and help you identify element locators (i.e. ways to identify elements on the screen) and even play around with the app.

It can easily run on any running Appium server and is really a cool utility to help you identify element locators and develop Appium scripts.

You can download it by just going to the Appium Github repo, and searching for appium-inspector. 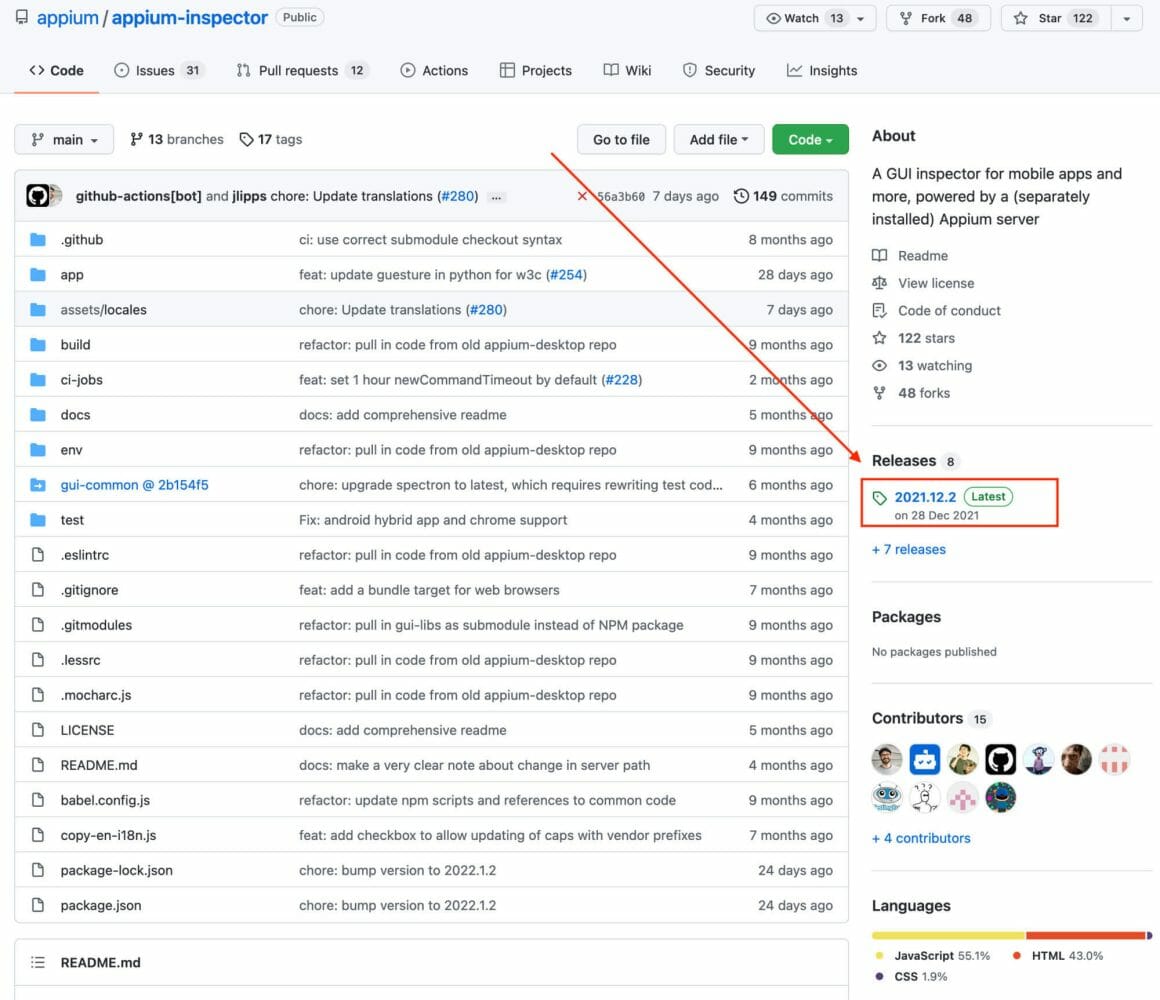 Go to release and find the latest .dmg (on Mac) or .exe (on Windows) to download and install. 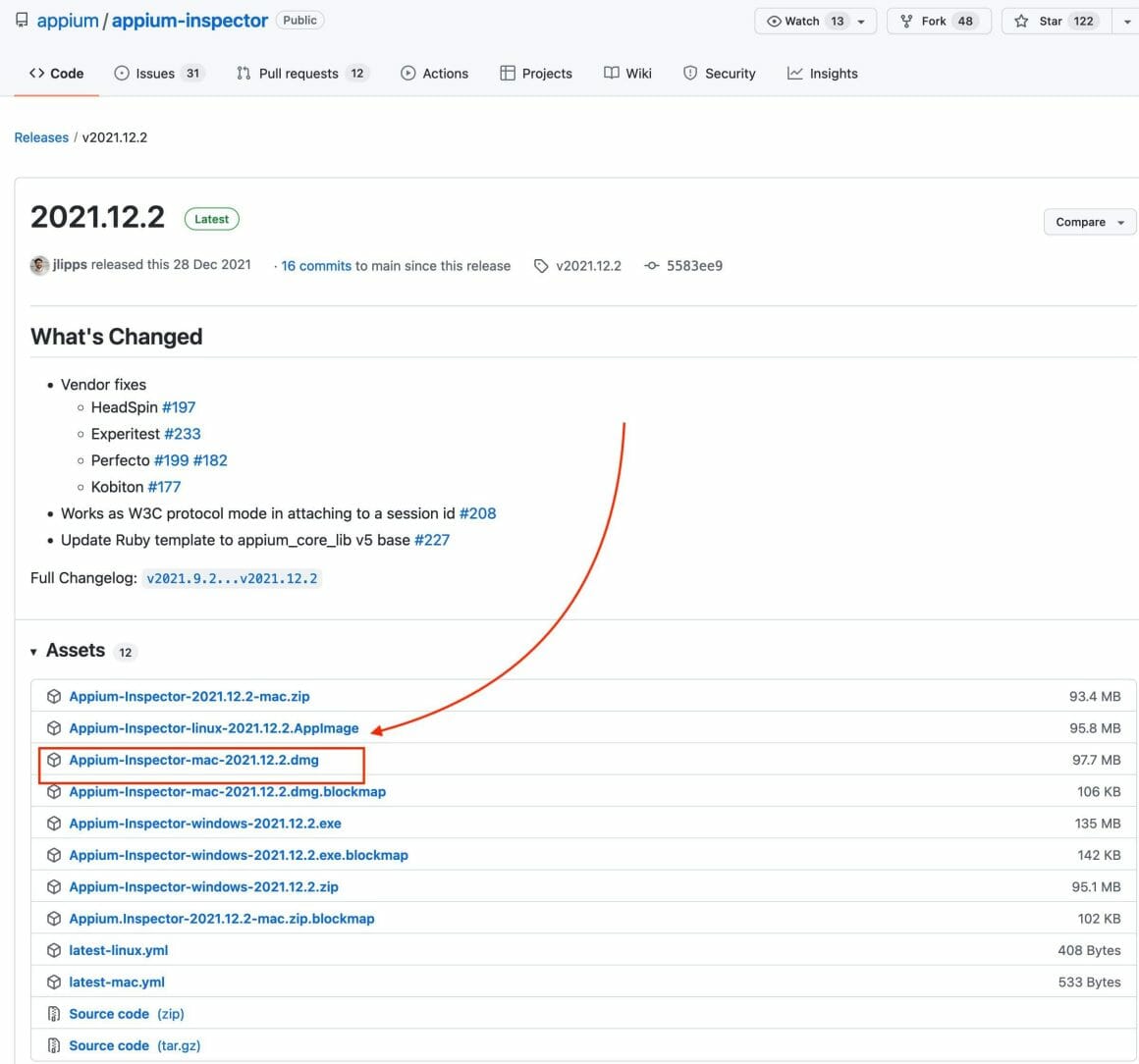 On Mac, you may get a warning stating: “Appium Inspector” can’t be opened because Apple cannot check it for malicious software. 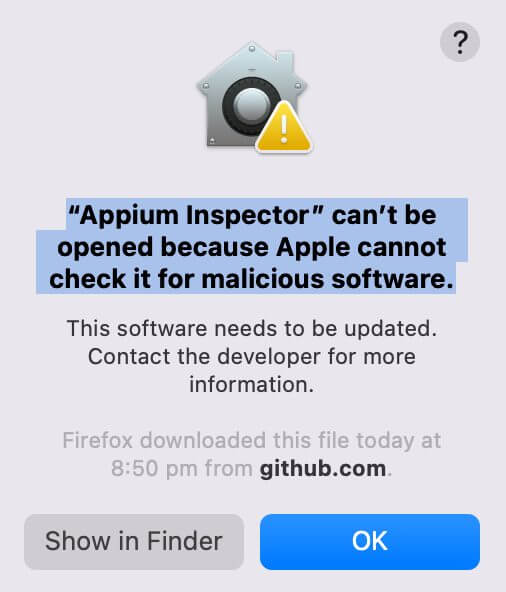 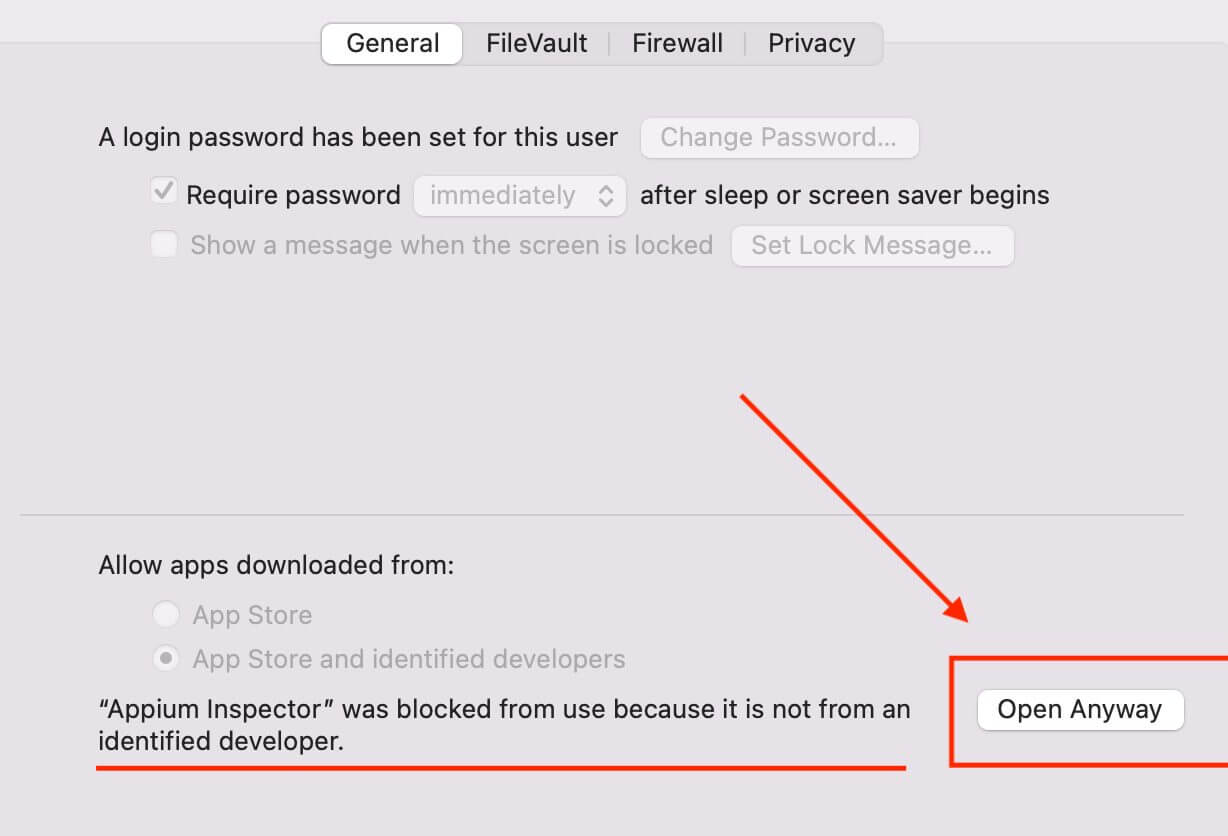 Once you launch Appium inspector, you’ll be greeted with the below home screen. If you see there is a JSON representation sector under Desired Capabilities section. 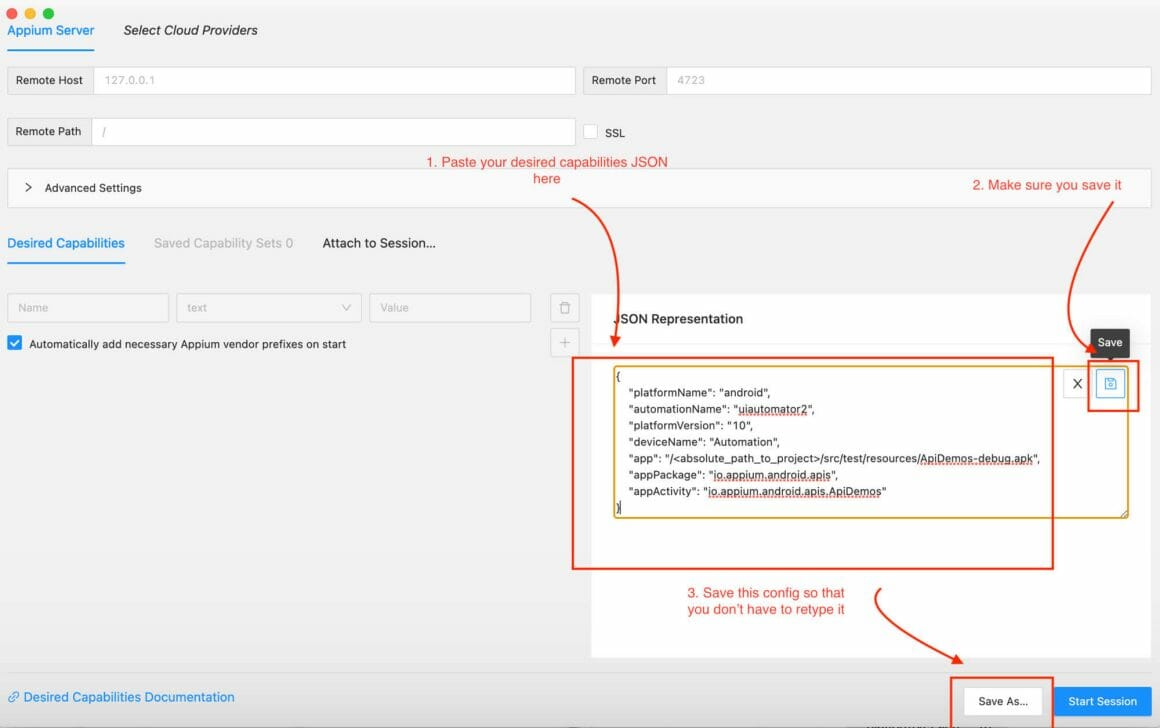 What are Desired Capabilities?

Think of them as properties that you want your driver’s session to have. For example, you may want to reset your app after your test, or launch the app in a particular orientation. These are all achievable by specifying a Key-Value pair in a JSON that we provide to the Appium server session.

Please see Appium docs for more idea on these capabilities.

Below are some sample capabilities we can give for Android:

For this post, we’ll use the sample apps provided by Appium. You can see them here, once you’ve downloaded them. Keep track of its absolute path and update it in-app key in the JSON.

We’ll add this JSON under JSON representation and then tap on the Save button. 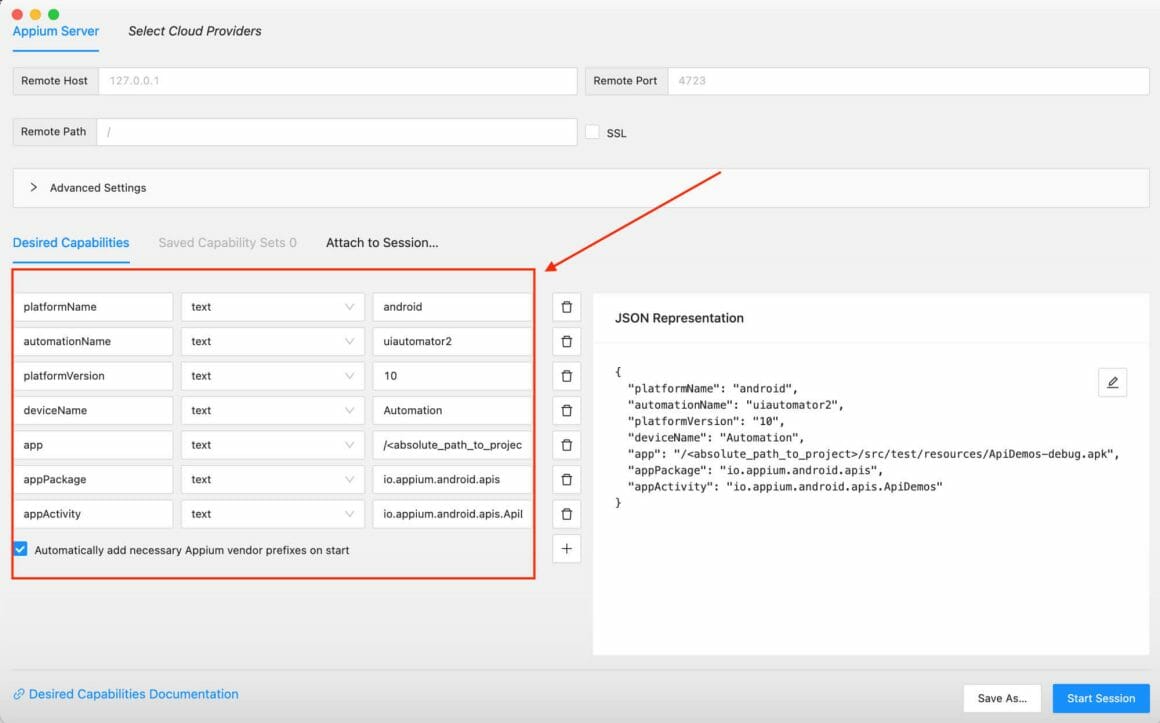 It would be a good idea to save this config for the future. You can tap on ‘Save as’ and give it a meaningful name. 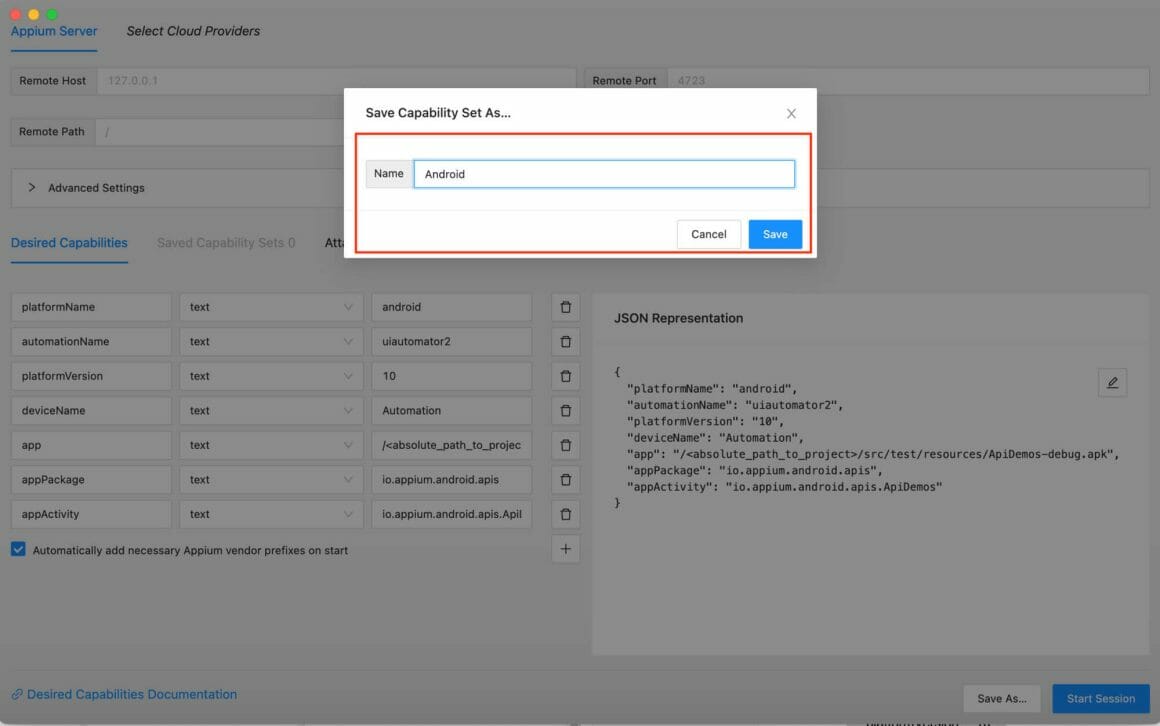 To start the inspection session, You need to have an Appium server run locally, run it via typing appium on the command line:

Let’s make sure our emulator is also up and running. We can start the emulator via AVD Manager in Android studio, or in case you are more command-line savvy, I have written an earlier post on how to do this via CMDline as well.

Once done, tap on the Start Session button, this should bring launch the API Demos app and show the inspector home screen. 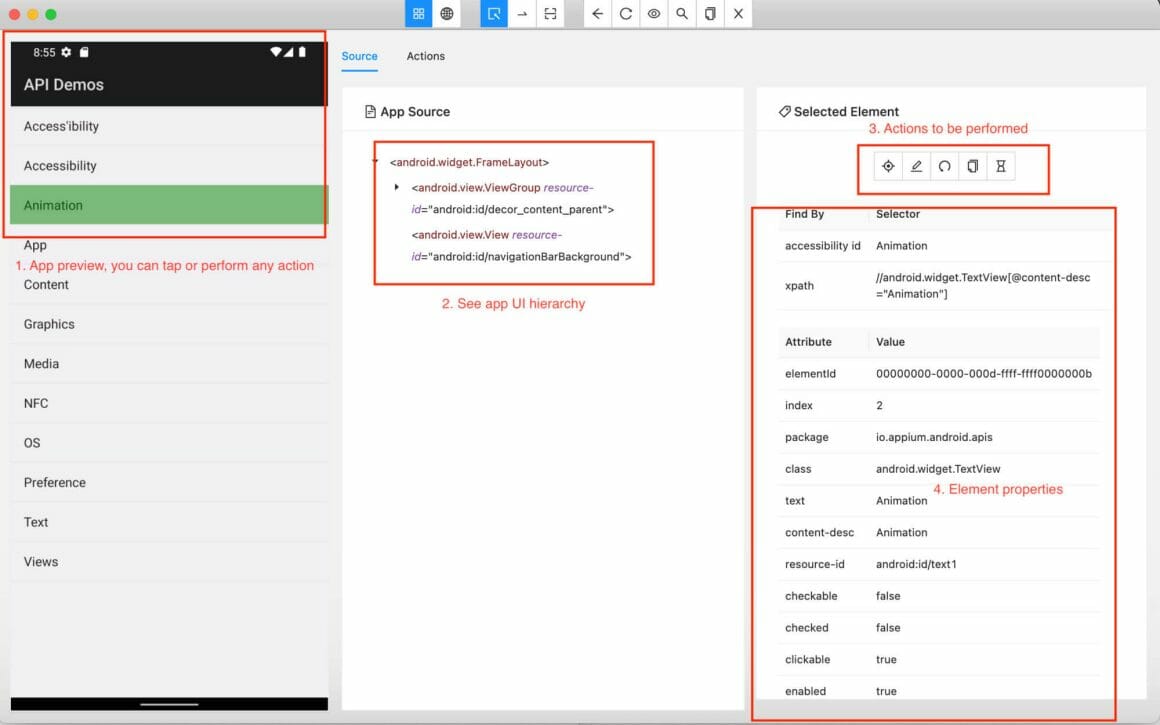 Using this you can tap on any element in the app and see its Element hierarchy, elements properties. This is very useful to author Appium scripts and I’ll encourage you to explore each section of this tool and get familiar since you’ll be using this a lot.

Phew, that seemed like a lot of setup steps but don’t worry, you only have to do this once and now we can get down to the real business of writing our first Automated test on Android.

You can download the project using Github from appium-fast-boilerplate.

We’ll also understand what the fundamental concepts of writing page objects and tests are based on these. Let’s take a look at the high-level architecture. 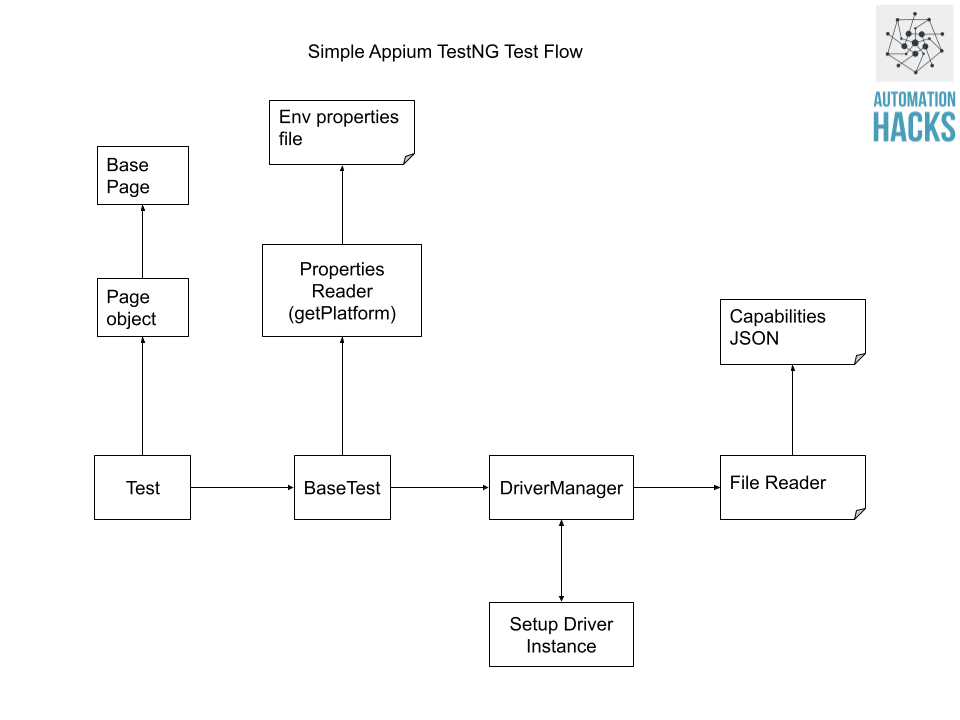 What Would This Test Do?

Before automating any test, we need to be clear on what is the purpose of that test. I’ve found the Arrange Act Assert pattern quite useful to reason about it. Read this post by Andrew Knight in case you are interested to know more about it.

Our test would perform the below:

Let’s start by seeing our test.

There are a few things to notice above:

Our class extends a BaseTest, this is useful since we can perform common setup and tear down functions, including setting up driver sessions and closing it once our script is done.

This ensures that the tests are as simple as possible and does not overload the reader with any more details than they need to see.

We see our tests read like plain English with a series of actions following each other. This is called a Fluent pattern and we’ll see how this is set up in just a moment.

Base Test and Driver Setup

We set our driver instance as protected so that all test classes will have access to it.

We create an instance of PropertiesReader class to read relevant properties. This is useful since we want to be able to switch our driver instances based on different test environments and conditions. If curious, please see its implementation here.

We get the relevant Target and then using that gets an instance of AppiumDriver from a class called DriverManager.

We’ll use this reusable class to:

A Simple Page Object with the Fluent Pattern

Let’s take a look at the example of a page object that enables a Fluent pattern.

Above is an example page object class:

Every page object inherits from a BasePage that wraps Appium methods.

Congratulations, you’ve written your first Appium Android test. You can run this either via the IDE or via a Gradle command

You can see the entire project on the Github appium-fast-boilerplate, clone it and play around with it. Hopefully, this post helps you a little bit in starting on Android automation using Appium.

In the next post, we’ll dive into the world of iOS Automation with Appium and write our first hello world test.

You could also check out https://automationhacks.io for other posts that I’ve written about software engineering and testing.

As always, do share this with your friends or colleagues and if you have thoughts or feedback, I’d be more than happy to chat over at Twitter or elsewhere. Until next time. Happy testing and coding.

Gaurav SinghGaurav Singh is an experienced Software engineer in Test who loves to code in Kotlin, Python, Java, and JavaScript and builds and scales Test automation frameworks and teams. He believes in understanding and testing at all the layers of the stack and has worked with Web, Mobile, and Backend systems throughout his career in different domains. He blogs at automationhacks.io and posts about his journey and adventures in Software Engineering and Testing. Gaurav is an International conference speaker and has spoken previously at conferences like Appium Conf, Selenium Conf, and Automation Guild and shares his knowledge and learns from others. He has also built a few open-source courses for Test Automation University.