Selenium IDE is not sitting still. Since its relaunch earlier this year, Selenium IDE developers have been busy responding to user enhancement requests.  One highly-requested has just been released – the ability to export code from Selenium IDE for use in Selenium WebDriver. Code export from Selenium IDE today works with Java JUnit. The development team is looking for community members like you to add to the capabilities of Selenium IDE.

The code is being hosted and is available on Github. You can see examples as well as develop your own export capabilities.

But, first, here is what’s new. 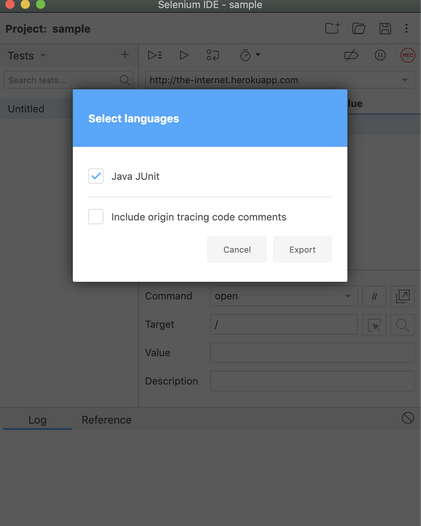 test or a suite, selecting Export,   choosing your target language, and clicking Export.

This will save a file containing the exported code for your target language to your browser’s download directory.

When exporting there is an optional toggle to enable origin tracing code comments.

This will place inline code comments in the exported file with details about the test step in Selenium IDE that generated it.

The Selenium IDE team intends to support all of the officially supported programming language bindings for Selenium (e.g., Java, JavaScript, C#, Python, and Ruby) in at least one testing framework for each language.

Contributions are welcome to help add new languages and test frameworks for a given language. See How To Contribute for details on how.

The exported code for Java JUnit is built to work with Java 8, JUnit 4.12, and the latest version of Selenium 3.

You should be able to take the exported Java file and place it into a standard Maven directory structure with a pom.xml file listing these dependencies and run it.

Code export was built in a modular way to help enable contributions.

Each language and test framework will have its own package containing the code to be exported. Each snippet of code maps to a command in Selenium IDE and each of these packages rely on an underlying “core” package which does all of the heavy lifting.

Here are the steps to create a package for a new language or for a new test framework within an already established language.

Next, add the new package as a dependency to the package.json in code-export.

Lastly, run yarn from the root of the project.

2. Update the locators and commands

The core function of code export is generating the language specific strings. The most prominent of these are the commands and locator strategies (e.g., the syntax for the “by” lookups).

For a given language, there is a file for each, along with accompanying test files.

You can see an example of that in github: packages/code-export-java-junit.

When declaring new commands you can either specify its output as a string, or as an object which specifies indentation levels).

Hooks make up a majority of the structure of the code to be exported (e.g., a suite, a test, and all of the things that go into it like setup, teardown, etc.). They are also what enables plugins to export code to different parts of a test or a suite.

There are 9 different hooks:

See an example of hooks being implemented in packages/code-export-java-junit here: Hooks

In each language you need to specify some low-level details. Things like how many spaces to indent, how to declare a method, a test, a suite, etc.

Find an example of this being implemented in packages/code-export-java-junit here: Language specific options

Once you’ve got everything else in place, wire it up for use in the UI.

This is possible in packages/code-export/src/index.js.

You will need to:

The best end-to-end test for code export applies a series of tests and verify that they run as you would expect.

From a development build, access the seed tests and verify that all of the standard library commands work for your new language.

Test, fix, and test again until you have confidence with the end result.

You’ve done the hard part. Now simply submit a PR. Please do so against the v3branch.

For More Information on Selenium IDE:

The original version of this article appears in the Selenium IDE documentation site.