If you use Applitools Eyes, you’re calling our AI-powered visual testing service from your functional test scripts. Those scripts likely reside in a code repository, or multiple code repositories, in your development environment.  And, if you are using Atlassian Bitbucket, you want your code pulls to drive code merges, and also merge branches of your Applitools baseline images. With our Applitools and Bitbucket integration, you can. You can also use our Applitools and Atlassian Bitbucket integration to tie into your favorite CICD solution, including Atlassian Bamboo, Jenkins, TravisCI, CircleCI, and more.

Applitools In Your Bitbucket Workflow

As you may know, Applitools Eyes supports multiple branches, each of which can consist of multiple test baselines. Eyes supports creating a new branch based on an existing branch, independent updates to the baselines in each branch, comparing branches to detect conflicts, and finally merging of the baselines in branches. This is all designed to fit into a trunk-and-branch development workflow.

Effectively, Bitbucket workflows drive both the application code as well as the Applitools Eyes repositories.

For the cloud integration, you simply need to point to the Bitbucket server and then identify your team’s repositories. There are a few other details listed in our documentation. For the self-hosted solutions, you need to configure your CI solution (CircleCI, AppVeyor, Jenkins or Bamboo) so that it sets the environment variable APPLITOOLS_API_KEY to your Applitools API key. Easy.

For the self-hosted solution, you will need to point your Applitools solution to your Bitbucket server and identify your team’s repositories. You will also need to allow traffic from the Applitools Eyes service to traverse your data center (and, potentially, your corporate) firewall. Again, the details are in our Bitbucket integration documentation

To run the Bitbucket integration, you need the latest SDK for your UI development language of choice. SDK update are available for the following languages:

The SDK includes a call for APPLITOOLS_BATCH_ID, which links the Applitools run to the Git commit information. From this link, the images collected by Applitools Eyes link to the branch of code being built and run – or integrated into another branch.

Bitbucket and Applitools in Operation

So, how does this all work in practice?

The Eyes Bitbucket integration is based on the Bitbucket pull request. When there is an open pull request, Eyes adds the following functionality to your Bitbucket workflow:

Once you have established the integration for a given application, a pull request automatically launches Applitools Eyes for that particular branch activity. When the resulting build process run smoothly and the Build panel shows no errors, move on to your next task. Otherwise, you need to resolve the conflict. 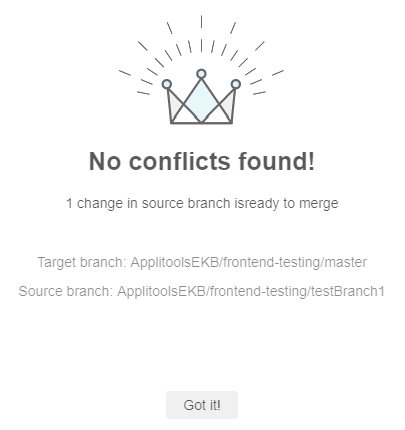 By using this integration, you link your Applitools Eyes visual testing with your CI workflow. You automate the branch names for your Applitools eyes results, and your Bitbucket pull requests drive the workflows that allow you to identify and resolve differences. You can ensure tight integration between your functional tests in your favorite language and testing tool and the visual results captured by Applitools Eyes.

Blog: How to Make Jira Easier to Use with Integrated Visual UI Bug Tracking