So, you want to know about visual testing for your Vue.js app in Storybook using Applitools? So did I!

In this article, I’ll walk you through a complete, step-by-step guide of how to visually test a Vue.js app with Storybook and Applitools.

If you’re not already familiar, Applitools is an automated visual regression testing framework. It focuses on the visual aspects of your app and plays a major role in exposing the visual differences between baseline snapshots and both current and future snapshots.

Applitools integrates with dozens of development and testing frameworks, such as Cypress.io, Storybook, and Selenium. It provides SDKs for use in your projects to seamlessly communicate and interact with Applitools, in order to send both baseline and test screenshots.

So, let’s get started with some visual UI testing. Your visual testing project will depend on Vue.js, Storybook, and Applitools. You will also need the node.js tools. So, firstly, make sure you’re familiar with the following and have them installed on your machine:

Before we immerse ourselves in writing code, let’s look at how Applitools and Storybook work together.

How Applitools works with Storybook

No matter whether you use Vue.js, React, or Angular, Storybook doesn’t offer any extension points for third-party frameworks, such as Applitools, to integrate with. The Applitools team worked around this limitation by providing the Applitools Eyes Storybook SDK.

The behavior of this SDK is that once you run it locally on your machine, it will first start by collecting all stories in the application, run them all via the Storybook engine, generate DOM snapshots for each and every story, and finally upload these snapshots to the Applitools Eyes server. Here’s a visual of this flow: 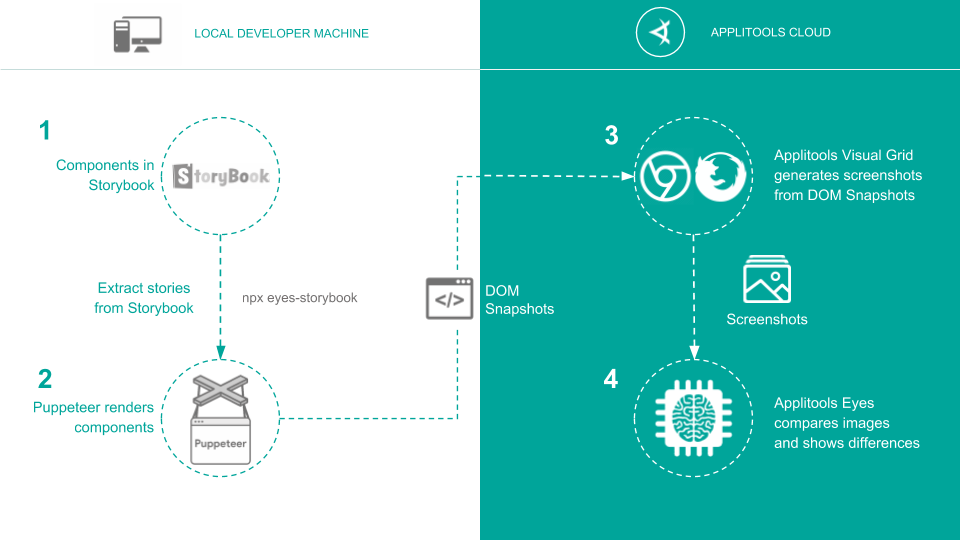 On the server, the tests are run and an actual image snapshot is generated. Each and every snapshot is compared to a baseline snapshot (if one exists) and results are displayed on the Test Manager Dashboard.

This kind of integration provides a smooth experience in terms of writing Storybook stories. Nothing changes in the way you write your Vue apps.

Now, let’s get on with it and start coding …

For this demonstration of visual testing a Vue.js application with Storybook and Applitools, I’ve chosen the TodoMVC example, published as part of the examples projects on the Vue JS website.

Let’s follow the steps to run the TodoMVC app and add a few Storybook stories.

Step 3: Install all the npm dependencies. Issue the following command: 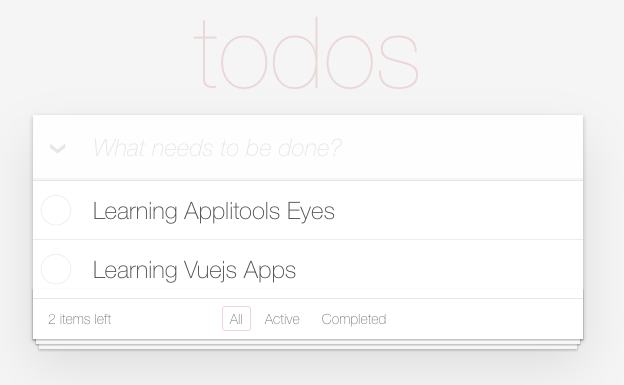 Step 6: To add the Storybook package to a Vue.js app, you issue the following command:

The command takes care of automatically installing and configuring Storybook folders and files to your project. It even adds an NPM script in the Package.json file to make it easy to run Storybook stories.

There are two methods to set up Storybook in a Vue.js app. In our case, we’ve chosen the automatic setup. You can read more about setup modes on Storybook for Vue.

There is no need to install Storybook on this project. I’ve already taken care of that for you.

Step 7: Run the default stories added by Storybook by issuing this command:

It opens the Storybook Dashboard to start running your stories.

Step 8: Refactor the code and extract a new Todo component. In general, and especially when writing Storybook stories, it’s recommended that you structure your code into a set of components that could exist on their own. Check the new Todo component on the repo:

Step 9: Add a new Storybook story to test the Todo component. Locate the “./stories/index.stories.js” file and replace the content with the following:

Now that the story is ready, let’s run it with Storybook by issuing this command: 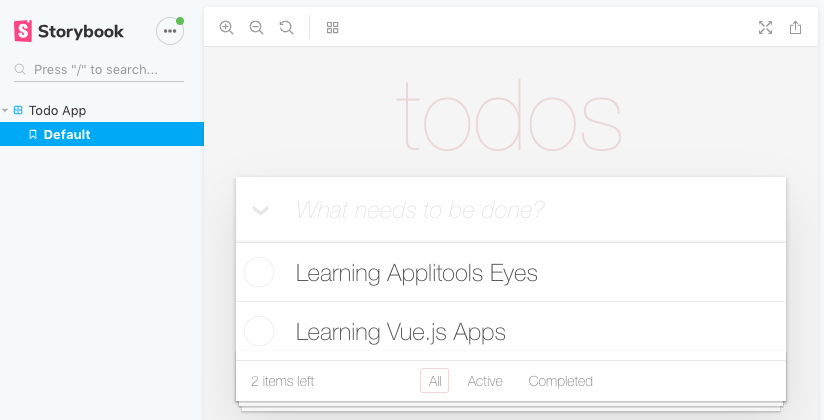 Make sure you get an Applitool API Key and store it on your machine. For a complete tutorial on how to install and run Applitools Storybook SDK for Angular, check out this article: Storybook Angular Tutorial.

The command simply opens the Storybook stories, runs them one by one, and then sends all the DOM snapshots to the Applitools Ultrafast Grid Server.

If you expand the single test run, you get the following result: 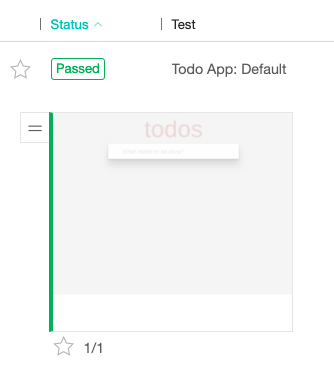 You can see how simple it is to add and configure Applitools Storybook SDK into your existing Vue.js application.

Let’s continue on and introduce a visual change and run our UI tests once again.

Step 12: Introduce a background color change to the header of the main input field on the page.

Open the /src/components/Todo.vue component and apply this change:

Step 13: Run the Eyes Storybook SDK once again with this command::

In my previous article on How I ran 100 UI tests in just 20 seconds you learned that Applitools Eyes SDK runs the Storybook stories, takes a snapshot of each, and sends the DOM snapshots to the Ultrafast Grid backend server. It saves the test run with the default test configuration.

Running this test yields an execution time of just two seconds! To be clear, this is what we spent rendering baseline images, once the DOM snapshots were uploaded. Even so, that’s really fast.

Applitools Eyes SDK gives testers as well as developers the upper hand in configuring many aspects of the test configuration settings including the Concurrency field. By setting the value of this field, you can instruct the Ultrafast Grid component to use a certain number of parallel threads or processes in order to run and your visual UI tests.

Let’s add more custom viewports into test configuration settings and also set the Concurrency field to a value of 100 and see the results.

In this test configuration, we are running 20 tests with 10 unique view ports on two major browsers: Firefox and Google Chrome.

The Eyes SDK/Server took only 15 seconds to complete all the above tasks, create baselines, and report the results on Applitools Test Manager Dashboard, for the entire batch of 20 test runs for a single Storybook story. 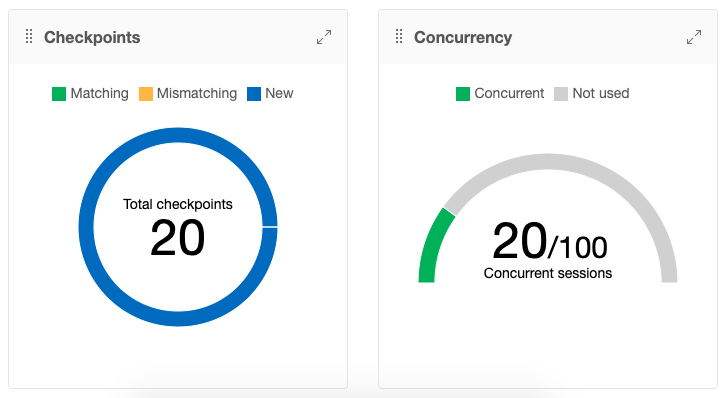 Step 4: Introduce a background color change to the header of the main input field on the page.

Open the /src/components/Todo.vue component and apply this change:

Step 5: Run the Eyes Storybook SDK once again with this command::

Once again, the Eyes SDK/Server took only 17 seconds to upload the DOM snapshot, run the entire batch of visual UI tests, and display the results on the Applitools Test Manager Dashboard.

Whether you are developing in Angular, Vue.js, React, or any other technology of choice, Applitools have you covered, in running your visual UI tests, by providing a rich set of SDKs to cover many test frameworks out there!

More Reading for you

Here are a few more related posts you might want to read through.

DevOps & Quality in The Era Of CI-CD: An Inside Look At How Microsoft Does It

The Joy of Testing in Production – with expert Amber Race

Visual UI Testing at the Speed of Unit Testing, with new SDKs for Cypress and Storybook

How to Visually Test React Components Using Our Storybook SDK