We created Test Automation University (TAU) to help you learn best practices for using test automation in your app development process.  As we have added classes to TAU, it became apparent that we needed to make our site more productive for users with different interests. So we included learning paths. 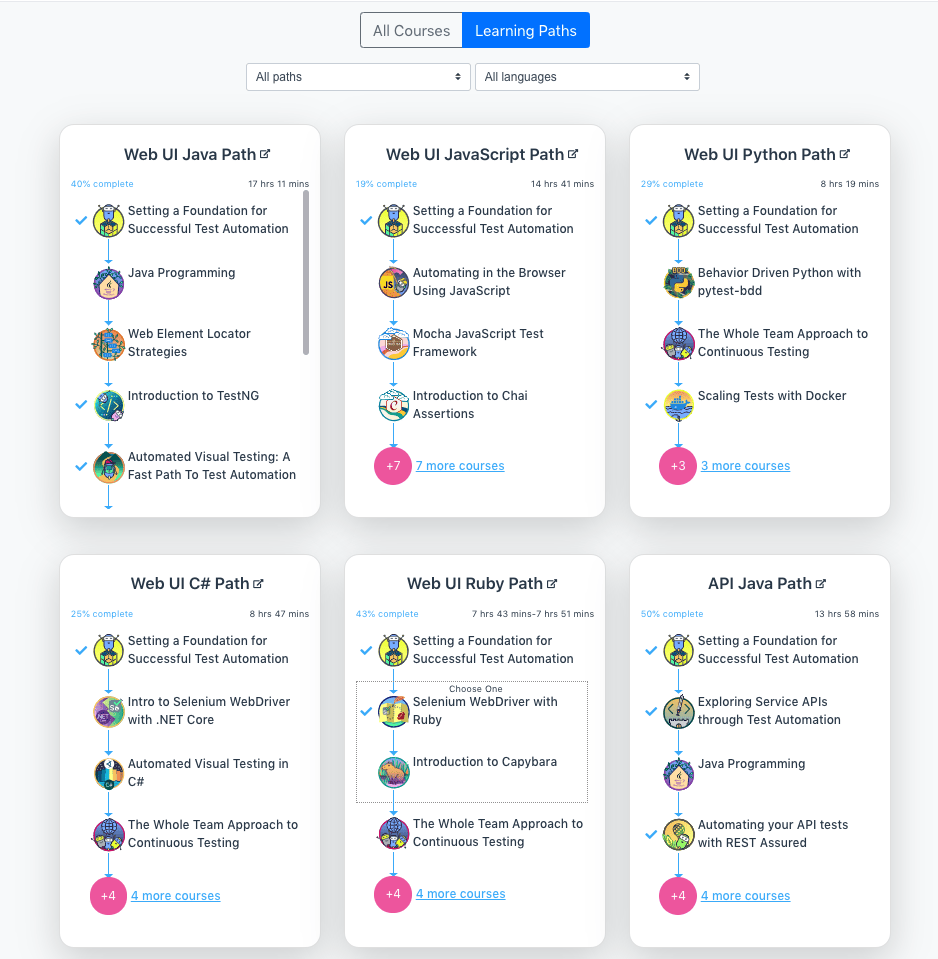 Learning paths give you a way to find the courses right for you. Are you writing test automation for APIs in Java? We can send you down the right path. How about testing mobile devices with Swift? Check. What about web tests with Ruby? Yep.

No matter what kind of tests you are trying to automate, you can find a learning path to help you.  For each track, you start with the basics. Once you finish a path, you have learned core concepts and practiced some of the critical skills needed to automate your testing.

With the new learning paths, TAU makes it easy to develop the skill set you seek.

Choosing a learning path is pretty straightforward. On the main page showing all the Test Automation University courses, select the Learning Paths tab:

Unfiltered, this page shows all paths for all languages. The selector lets you filter the learning paths by path type or by language.

As one of the early users of Test Automation University, I appreciate the new learning paths. They have helped me understand the skills I need to develop in software testing – and I love the hands-on nature of the courses.

Let’s go through the paths to give you a sense of what each provides you.

Codeless is, as you would expect, a path that needs no direct coding skill.  Otherwise, the paths let you select one of six languages on which to focus your testing skills:

We continue to develop these paths, so expect changes to both this blog post and to TestAutomationU going forward.

How Do I Do Web UI Testing With Java?

To answer this question, let’s select the Web UI Path, and then select Java. 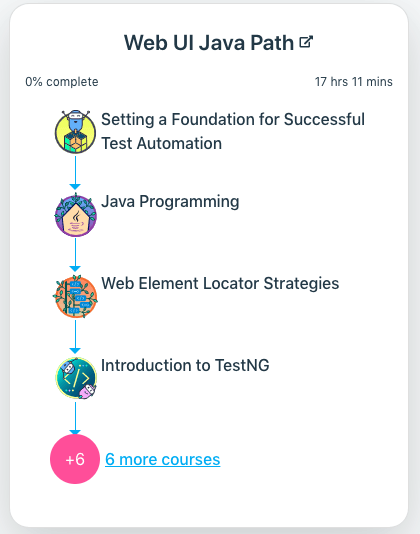 Let’s take a look at the courses today in the Web UI Java Path.

These ten classes involve a little over 17 hours of instruction. Each course dives into different elements.

Two of these courses apply to the Java Language specifically: programming in Java and the Java automation engine. Two more are common among the web UI test path: finding web elements on a page, and how to test visually. The others are part of the common core courses shared among all the testing paths.

The questions these courses answer are easily transferred to any combination of languages and test cases.

How Do I Do API Testing With Java?

Let’s take a look at the Java API course. 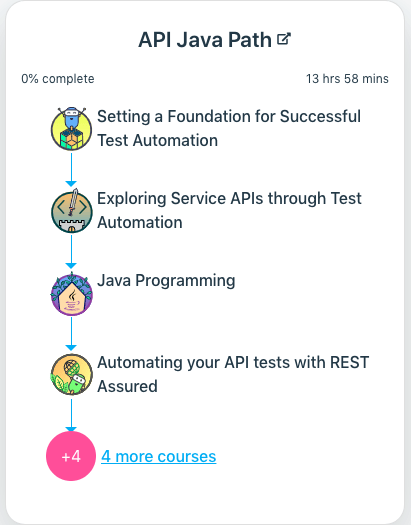 As we continue to add learning paths to TAU, our core goal is to answer these questions:

What is on the horizon for Test Automation University?

I am writing this post early in September 2019, and I expect we will update this post regularly, as we continue to add courses to Test Automation University.

In the immediate term , we just launched the course Introduction to Cypress, which shows how developers and testers can use Cypress to test their web applications. We have added this course to the Web UI JavaScript path as an alternative to using webdriver.io.

Keep checking out Test Automation University for the latest offerings.

Find Out More about Applitools

As the sponsors of Test Automation University, we’re excited to help you get even more efficient in your UI testing.  It’s all up to you to find out more.

You can request a demo of Applitools.

You can check out our tutorials.