As a test engineer, you have to write, run, and maintain a bunch of tests for your applications. Are you a rockstar engineer? Do you stand out from your peers?

We know what can make you stand out. And, we have over $40,000 USD in prizes, including two $5,000 Diamond Prizes we are waiting to share with you and a few of your engineering colleagues who are willing to spend a few hours trying something that can change your career. Interested? Apply now to join the fun! Or, read on to find out more.

By the way, here are the prizes you could win: 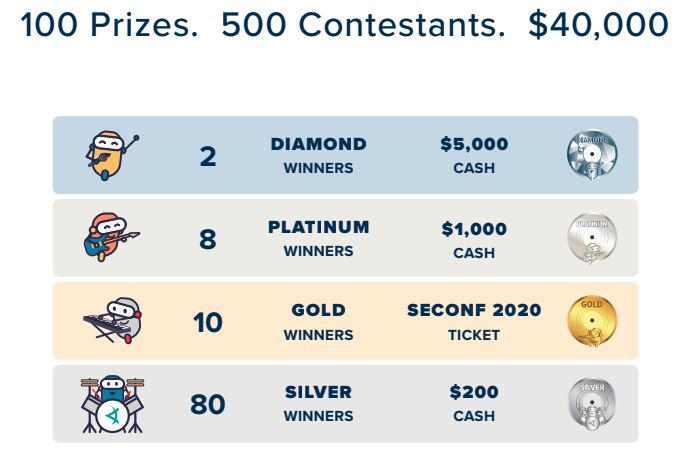 What Skills Separate Rockstars from Everyone Else?

Test automation rockstars have a unique set of capabilities that make them incredibly valuable. Among these are:

Rockstar engineers get more effective coverage than their peers. They test more, faster. They catch and help fix bugs early in the dev cycle. They keep up with the demands of continuous delivery environments. They can manage the comprehensive testing needed for CSS changes.

How Does Someone Become A Test Automation Rockstar?

Mad skills are part of it, but a test automation rockstart also has better technology than an ordinary test engineer. One key capability lets engineers automate visual rendering of entire pages and other visual images, including PDFs.  These rockstars have gotten hold of and deployed a solution using Visual AI into their test processes. Visual AI uses computer vision to recognize and identify meaningful, significant differences between previously-validated baselines and the current run of an application.

Rockstars use Visual AI to monitor functional tests, identify new behavior, and either accept it as designed or reject it as an error. For accepted behavior, rockstars incorporate the change to their baseline with one click. For errors, rockstars inform the development team of the offending code and it’s corresponding PR. Boom! Bug fixed in minutes instead of hours or even days.

Unfortunately, without any form of visual testing, test engineers fall back to functional testing by inspecting output HTML for specific elements that appear in the correct behavior of a web page. If a visual element has no specific check, it isn’t checked. And, the HTML inspection does not, generally, comment on how the browser has rendered the page – so a page can pass a text inspection and still fail from a user’s perspective.

Visual AI makes visual testing a reality – both for checking the rendering of an individual web page as well as automating functional testing of web applications. Visual AI makes it easy to snapshot a given page at the end of some testing behavior and compare the output to the baseline. If the page doesn’t match what a user would see in the baseline, Visual AI flags the individual differences and lets the test automation rockstar determine the next steps.

How Do I Become A Visual AI Rockstar?

At Applitools, our Visual AI test solution fits easily into your existing test workflow. You don’t need to install a new software tool on-premise or learn a new testing language. Whether you code in Java, JavaScript, Python, C#, or a host of other languages – whether on desktop, laptop, mobile, or all of the above – Applitools fits easily into your testing process.

The Applitools solution lets you replace all your functional test assertion code with a call to the Applitools Eyes Visual AI test service. Each check captures the existing window or a full web page and compares much more than you can through code-based functional testing. Visual AI identifies the visually-significant differences for a given test and lets you accept, or reject, the change. Accepted changes become expected going forward. Rejected changes get sent back to developers.

So, the key to becoming a Test Automation Rockstar is to learn how to use Applitools. And we have more than 40,000 incentives for you to learn Applitools now.

What Is The Test Automation Rockstar Challenge?

Applitools is giving away over $40,000 in prizes to engineers who show they know how to use Visual AI to become Test Automation Rockstars. We think this gives you an incentive to take some free time and try new technology, not to mention the value of upskilling on the use of Visual AI.

To get started, follow the simple get-up-to-speed process we have set up for you:

Individuals who complete the challenge and submit their results can win one of the cash prizes Applitools is offering. And, we’ll let the world know you are a rockstar.

Why Is Applitools Doing This Contest?

We think this is a win-win. We want engineers to get better results. And, we want you to know that we exist.

Lots of engineers think we’re just a visual inspection solution. But, we are much more than an inspection tool. We can make you incredibly productive.

When you take our course, learn our product, and learn how to use our product to simplify your testing and increase your coverage, you will realize that we’re a core tool for making you successful.

As someone with a critical job for your organization, you have lots of ways to spend your time. And if you’re like most test engineers, you guard your free time (as it can slip away during an outage or other app issue). So, if someone says, “Invest in us!”, it’s not unreasonable for you to ask, “what’s in it for me?”

So, we have started this contest to give you an incentive to spend your free time trying our solution and learning what we think you will come to understand – Applitools makes you much more productive.

How Do I Join The Applitools Visual AI Automation Rockstar Contest?

This sounds great, right? So, how do you join the contest?

Once you sign up, you’ll be guided to set up an Applitools instance and run through all the test steps. Once you’ve done the work, submit your results and be part of a contest that could net you as much as $5,000.

Add in what we think you will gain in skills and knowledge related to Visual AI, your expected return for this exercise exceeds the opportunity cost of your time. In other words, whether or not you’re a contest winner, we think you will walk away as a winner. Award or not, you will experience what it takes to be a test engineering rockstar.