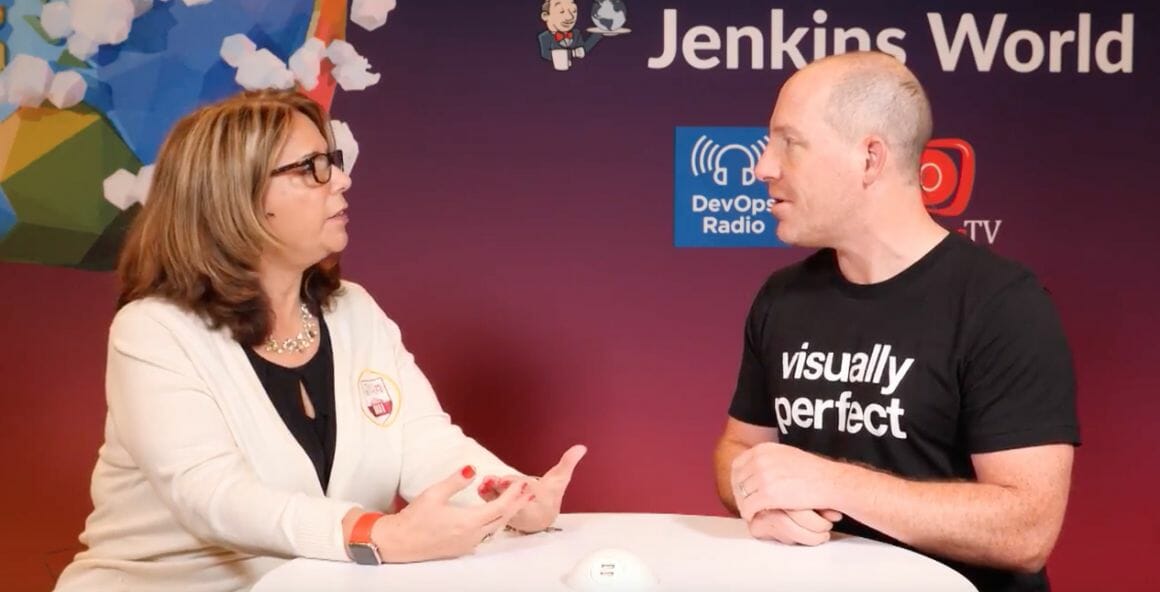 A few weeks back, Applitools made the trip just up the road from our headquarters to take part in DevOps World | Jenkins World San Francisco. The event is an international event that provides opportunities to learn, explore, network and help shape the future of DevOps and CI with Jenkins. It’s always an exciting and energizing event and this year proved no different as we were able to network and engage with leading minds in the world of software development.

While we were there, James Lamberti, our Chief Marketing Officer, had the honor of sitting down with Jayne Groll, CEO of the DevOps Institute, to talk shop and explore some of the ways Applitools has changed how organizations are able to use visual testing to deliver better UI/UX for their customers. Here are some of the highlights of that conversation.

Understanding Applitools and How It Fits into Digital Transformations

Jayne’s first question led James to discuss the basics of what the Applitools Visual AI tool is – and how it aligned perfectly with the theme of the event.

“Applitools exists to make sure the user interface is visually perfect on every device, operating system, and screen, whether mobile and desktop,” said Lamberti. “The theme [of DevOps World] this year is transform. And essentially, the issue or the problem that we solve for pretty much everyone in this room is digital transformation.”

While “digital transformation” at times is viewed as an industry buzzword, it is inarguable that businesses of all sizes and verticals are using digital as a means of fundamentally transforming their businesses, in part by building applications to streamline customer interactions. So when it comes to the user interface a customer-facing app, there is truly no brand spared from the impact of what a broken UI can do.

A real-world example James highlighted how a broken UI can fundamentally affect your business, and its bottom line, was his recent experience trying to book a flight via his mobile device. When it was time to finalize the transaction, the checkout button was unclickable – ending the purchase journey right then and there. As James pointed out, this sort of break in the user experience will cause your customer to switch on a dime to another company – and this is exactly the type of issue that can be prevented by partnering with Applitools.

Exciting Developments on the Horizon

Finally, Jayne and James touched on some of the exciting news coming out of Applitools – namely our newest product, the world’s first UI version control system.

“Essentially, we have integrated with GitHub and, for the first time ever, you can actually tie your code commits into GitHub directly to changs to the UI. This means that, for the first time, you can correlate code changes to UI changes, and tracking the history of how your UI evolves over time,” said James. “And so now, if there’s a UI issue, you can tie it back to what code commit caused that issue.”

For instance, if you see that an application stopped meeting its business goals a month ago — say, transactions declined, or user engagement slipped — you can look at the visual changes that were made to your app’s UI around that time, in order to discern if the application might be to blame. Furthermore, you know what changes to undo in your code to get your UI back to its previous state.

It sounds simple concept — and it is. What’s shocking, to us anyway, is that no one has built this fundamental capability for DevOps teams. It’s a crucial piece of application management – and one we are excited to bring to our customers. We think having the ability to have the visual UI tied to its code is transformative for how we approach some of the challenges around digital transformation.

If you weren’t able to connect with us at DevOps World | Jenkins World, reach out or sign up for a free Applitools account.

Jayne: Hi everyone. I’m Jayne Groll, CEO of the DevOps Institute here at DevOps World | Jenkins World in San Francisco. And I’m really excited to be joined by James Lamberti of the Applitools. Welcome.

James: Thank you. Great for you to have us. I appreciate you doing what you’re doing here. It’s exciting.

Jayne: It’s really exciting, right? I don’t know if anybody can hear the buzz in the background but the energy is really palpable.

James: It definitely is.

Jayne: Yeah, interesting. So James, tell us a little bit about Applitools and kind of what you’re expecting out of DevOps World during the next couple of days.

James: Yeah, sure. So Applitools, for those who aren’t familiar, we essentially exist to make sure the UI is visually perfect on every device, operating system, screen, mobile, desktop and so that’s what we do. And so, we actually are pretty unique entity here at Jenkins World this year. And, you know, what do we want out of it? I mean, the theme this year is transformed, as you know. And essentially, the issue or the problem that we solve for pretty much everyone in this room is digital transformation. So, we tie in really nicely in, you know, what digital transformation, I know it’s an industry buzzword, but really what that means, in a practical sense, is, you know, the UI for most brands in the world typically exists now in 500 to 1000 variations at this very moment in time. I mean, you think about your…or just our everyday lives constantly coming across broken UI and there is no brand spared. The largest brands in the world routinely have broken UI and it’s…you know, that’s really what we’re here to transform as we can get beyond this now. We built technology at Applitools that essentially solves for that problem and ensures a visually perfect world, as the t-shirt says.

Jayne: But you know the UI is really the user experience, right?

Jayne: So, you know, the influence of the interface and how the user perceives that often shapes the perception of the product, right? So, what’s your experience? What are users really looking for in terms of their UI experience?

James: Oh, I mean, I think, fundamentally, they want it to work. I mean, honestly, like you get…we’re to a point where this transformation and the number of iterations of the UI is so overwhelming, R&D and Dev teams simply can’t get up. I know in some sense of they’ve given up and honestly, customers see that. Now, the problem with that approach is that a customer can switch on a dime. I mean, I won’t name brands right now, but I was just trying to book an airline ticket and I literally had a responsive design issue on my mobile device. I could not check out. The button…that it passed the functional tests, right, from a test automation discussion. I was clicking the button to try to buy the ticket and it literally was not working, and I needed to get it done. I just switched to another airline. So, implications are pretty clear. You can have a UI issue or a bug that just looks bad for the brand, like doesn’t cast a great impression but more importantly, you can literally break the customer experience to the point where they just switch on the dime.

So, you know, we’re in a world and a situation where we can’t just give up any more and there’s no need to give up. Like you can actually solve for this problem through visual AI, which is what we do. We’ve actually created a technology that in real time, at scale, inspects the UI, spots the difference between what should be and what is, alerts the R&D team either pre-production [inaudible 00:03:42] monitoring and allows them to fix it. And so, it’s been a huge step forward for the industry and really completes that test automation chain, if you will, right? Because the UI…the reason the UI is such a problem is it exists outside a lot of the automation frameworks we’ve built up, right? And so, we no longer have to suffer this way.

Jayne: And so, it’s not just pretty, right? It’s not superfluous. It actually does have a strong influence on…

Jayne: …brand recognition and everything that’s associated with that, which is fantastic. So, we’re here at DevOps World, so do you guys have any announcements that you want to, kind of, sneak peek us with?

James: Yeah. I know, so I think, probably the most exciting thing, and we just announced it a couple days ago, is the world’s first UI version control system. And so, let me explain what that means. Essentially, we have integrated with GitHub and we are…for the first time ever, you can actually tie your merge, right, your branch, your fork, your merge into your GitHub Repo to the UI directly, so you’re seamlessly linking the UI to that particular code merge, and tracking that history, you know, forever. And so now, you’re in a situation where if there’s a UI issue, you can tie it back to what merge caused that issue.

James: And you have a history of, “Okay, we made these changes, who made these changes? Why do we make these changes? What exactly did the UI look like before these changes and what branch or fork was, you know, the one we need to fall back to?” And so, that’s just, I mean, it’s actually a really extraordinary…in simple concept. But for us to have the visual tied to that code build is transformative for how we deal with this problem I was just describing around digital transformation. So, that’s a big announcement and it’s really, really exciting.

Jayne: That’s extremely exciting and again, sometimes we don’t think of the UI as part of the Repo and being able to tie that together and trackback makes a lot of sense.

Jayne: So, thank you for spending some time.

Jayne: Really looking forward to the rest of the conference.

Jayne: We’ve just kicked off a little while ago and really wish you a lot of luck with your great announcement. Thanks.

James: Thank you very much. Thank you, DevOps.com.